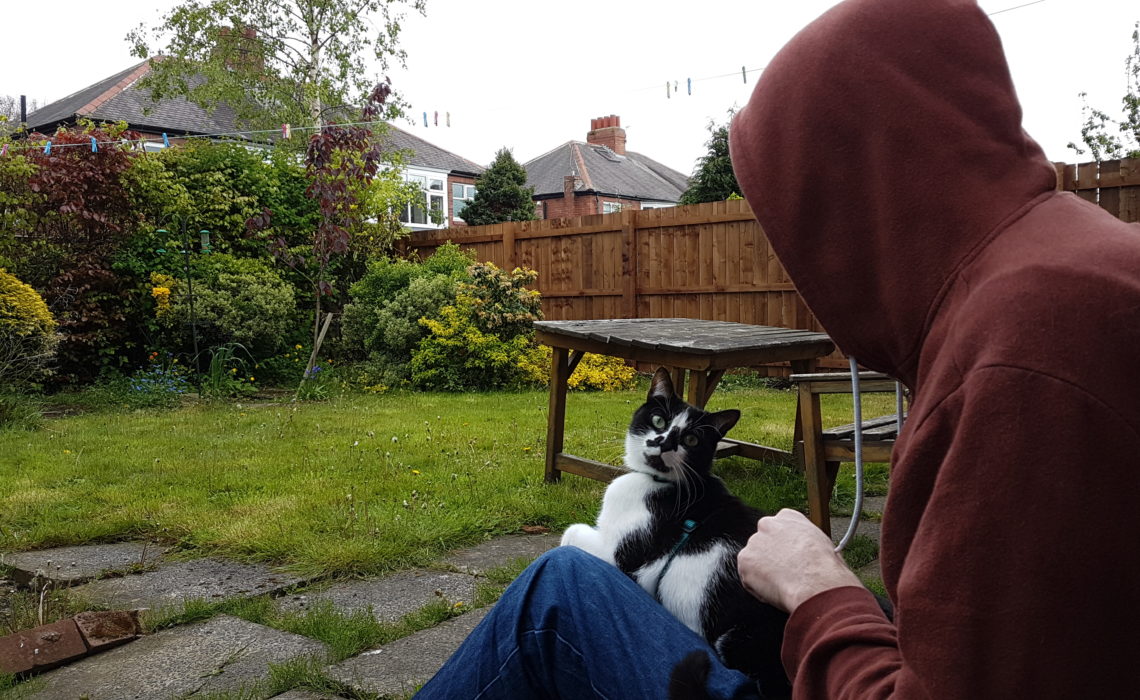 Our cat Errol has coronavirus. It’s an autoimmune disease that can kill, if not managed properly, and which is also highly contagious through faeces. So, for his own safety and the safety of other animals – and for our own peace of mind – R and I decided to keep him as an indoor cat.

Still, it’s difficult to keep a cat indoors all the time when he so clearly wants to experience the outside world. Errol loves watching birds, and his favourite thing is to have the window open a crack so he can feel the breeze on his face. We feel sad that he doesn’t get to experience the great outdoors, but at the same time we know we’re doing the right thing for him.

The other consideration is that we’ve both lost cats to road accidents. My cat Remi died after being hit by a car in 2012. It was, and still is, the worst thing that has ever happened to me. Remi was the most important person in my life and his presence helped me to get through some really tough times. Losing him was devastating, and I don’t want to think how awful it would be, for both R and myself, if we lost Errol the same way. So that’s also something we took into account when deciding whether or not Errol would be an indoor or outdoor cat. 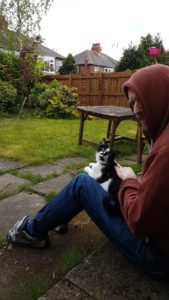 Still, just because Errol isn’t an ‘outdoor’ cat, doesn’t mean he can’t ever go outside. In fact, now we’re in our new house and have a nice, safe garden for him to go in, we’ve started taking him outside on a leash. At first he was so scared! He shook and cowered and didn’t want to be outside at all. Every little thing terrified him. But we took it slow and didn’t force him into anything, and now we’re at the point where he doesn’t mind his harness and has even started going to the back door and asking to be taken out.

Today I got a text message from R, asking me to come to the back garden, and this is the cute scene I found outside:

How adorable is this! Errol has calmed down so much about going outside that he was perfectly happy to relax on R’s lap for a good 15 minutes. The birds were flapping about and making noise, the breeze was ruffling his fur, and he was just totally chilled about everything. I’m so proud of him. He’s a bit of an anxious boy, and being kept inside has made him quite nervous about new things, so this is a massive step for him. Hopefully it’ll mean that we can give him a bit more freedom about being outside – not off the leash, of course, but maybe occasionally with a bit less supervision. In the meantime, he’s going to be getting some treats for being so brave 🙂