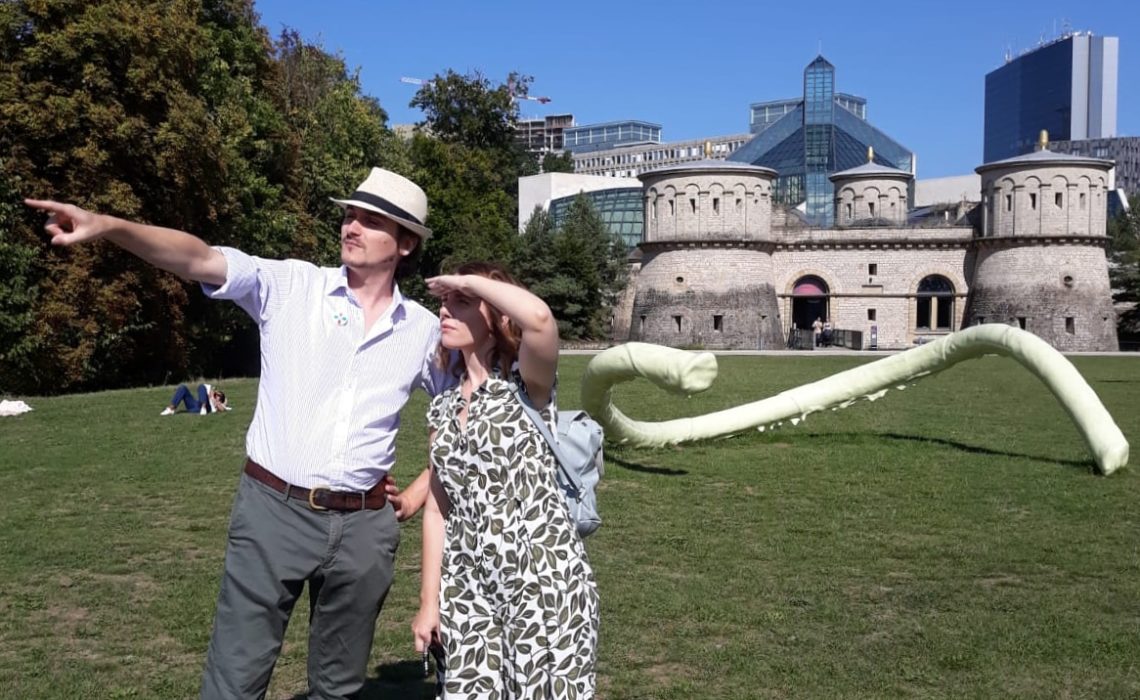 About a year ago my friends Sam and Marie decided to move to Luxembourg. Marie is Luxembougish, so for her it was a move home. I, being utterly selfish, was devastated and cursed the pair of them until I realised that what this really meant was free holidays. So, as soon as we were all free I booked flights and made the short hop over to visit them in their new house.

Sam is my best friend but we don’t see much of each other these days. What this means is that every time we get together we have tons to talk about so always end up spending the first night staying up late drinking wine. Which is exactly what we did when I arrived in Luxembourg. So of course the next day we both woke up with stinking hangovers and spent the first half of the day lying about the house and garden feeling sorry for ourselves. But Sam and Marie were both keen to show me around Luxembourg City, so in the afternoon we pulled ourselves together and went out for a jaunt.

Can I first just say that public transport in Luxembourg is swish af. Apparently they’re going to make it all free in a couple of months, which is awesome, but even so it really doesn’t cost that much and it’s SO much nicer than transport in the UK. Everything is clean and pretty and quiet, and people seem to respect the service and behave themselves. Which was especially nice given how much my head was throbbing.

When we got into the city we headed straight for the modern art museum to chill out and drink some tea. What was weird though is that in Luxembourg apparently it’s perfectly normal to have outdoor trance festivals in the afternoon on random Saturdays, for no apparent reason, and by coincidence there was one happening right outside the museum. Sort of like a very grown up, sunny afternoon rave, attended by a mix of middle class parents, school kids and a smattering of hardcore clubbers who were dancing away next to the only stage. The DJ didn’t seem bothered that there were only about 5 people up there – in fact, everyone seemed really happy with the whole thing and it helped that the sun was shining. Sam and I almost immediately cured our hangovers by ingesting a huge amount of some of the best pad thai I’ve ever eaten from one of the many hipster food trucks, and then we went for a walk through the forest to look at some inappropriate metal deer and play Dune with the giant worm sculptures.

Luxembourg City itself is gorgeous and has an amazing history, but even before we got to the Grand-Rue I had gotten completely distracted by how many of my favourite online shops, such as Sandro and Ba&sh, have physical stores there. Next time I visit I’m going to take a thousand quid and a day to myself to just go nuts in all the stores. They have these huge opticians as well that have hundreds of different pairs of designer frames, all of which are utterly gorgeous and half of which I’d never heard of, so because I needed sunnies Sam and Marie graciously let me go mental for a bit and try on loads of different styles. I didn’t find one I absolutely loved and felt a bit guilty about taking up so much time so we only stayed for a bit, but I could have easily been in there for a couple of hours or more. On the way out of the city they helped me not make a twat of myself by attempting to use my abysmal French on a poor shop owner from whom I was trying to buy chocolates for R. Duolingo, here I come!

The rest of the weekend was basically spent lounging about. We had lunch out, dinner in, drank more wine and enjoyed the sun. Spending time with those 2 always makes me realise how much I miss seeing them. They’re both teachers and we’re all very busy but hopefully it won’t be too long until the next time, and then I’ll bring R as well.