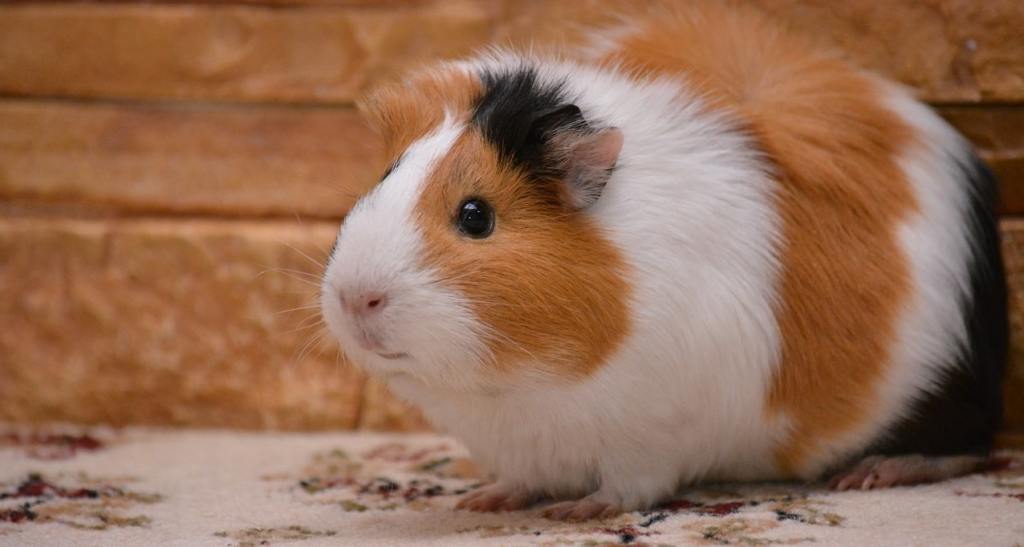 These baby sizes have lost all meaning for me now. I used to have a guinea pig and I still have no idea how big the baby is. Are all guinea pigs roughly the same size? I did start to google, but the very first entry for ‘American guinea pig’ describes the breed as having ‘solid, rectangular-shaped body somewhat like a brick’, which I found really off-putting. Plus, there’s a part of me that’s enjoying the abstractness of it all. My awareness of the baby right now is less about how much room they’re taking up inside my torso and more about how the experience of having them there is making me feel. And how they makes me feel is, by and large, awesome! The only bit I’ve not been enjoying is when they spends 12 hours kicking me in the bladder – an event that’s happened more than once, annoyingly. I seem to be carrying the world’s most active baby. They only seem to sleep a couple of hours a day and the rest of the time they’re rolling around and kicking various things. They’re doing it right now! The only exception seems to be when I invite someone – like R or my mum – to have a feel, and then they go completely still. Hilarious.

At 22 weeks I’m now starting to really think about the fact that the only thing left for this kid to do is get bigger. I wouldn’t say I’m ‘uncomfortable’ at this point, but I am having the odd uncomfortable day here and there, where it feels like my skin is stretched almost to breaking point. And I do worry that for 5.5 months pregnant I do look … well, huge, to be honest. So from time to time I’ve been googling what I should look like around this time, which everybody says you shouldn’t do because you’re bound to find pictures of impossibly small women with teeny tiny bumps that will do nothing except make you feel bad about yourself. And while it’s true that I have seen a lot of those (!), I’ve also seen quite a few of women with bigger bumps that look comparable to mine, so actually it has helped me feel a bit less concerned.

We went for our 20 week scan a couple of weeks ago and so have had another chance to have a look at our kiddo. They are absolutely gorgeous, and everything is perfect in terms of growth and physiology. And, happily, my being on ondansetron hasn’t done any damage – there was a very slightly increased risk of cleft palate, but their mouth and face are absolutely perfect. We also got to reconfirm that we’re having a [redacted] (even though they didn’t make it easy by having the cord tucked between their legs) and got to see them rolling about, waving their hands, feet and bum about, and doing some sucking / gulping. I love them so much. They are amazing. I can’t wait to meet them 🙂

That was our final NHS scan, but we’ve decided to have another private scan done at 30 weeks to check how they’re doing. We don’t want to have a 4d one done (they look weird) but just want to have another chance to take a peek and make sure they’re baking properly. I think that’s fairly reasonable – after all, 10 weeks is a long time to go without being able to see your baby!

In other news, I can also now reveal the big news that I hinted at a couple of posts ago, which is that my sister is also pregnant! She told our parents last weekend, and our brothers shortly afterwards, so I can now talk about it relatively openly. A is 9 weeks behind me and I was the first person she called when she found out she might be pregnant. I say might be – she facetimed me holding a test with 2 lines on it that she wasn’t entirely sure how to read, so I told her to go out and get one of those ones that gives you an exact readout in words, so there’s absolutely no ambiguity. And of course, she was indeed pregnant! And sitting on that news for just over 2 months has been no mean feat, I can tell you. Especially because our babies will be our parents’ first and second grandchildren, and the fact that they’ll be arriving within approx 2 months of each other is pretty amazing. My mum is over the moon, of course, as am I. The only thing I’m a bit annoyed about is that we’ll now have to share grandparent time, but the nice thing is that A’s partner S’s family live quite close to them down near London, and we live closer to our mum and stepdad, so hopefully there won’t be too much wrangling.

(I’m not really annoyed of course, but it is quite funny 😉 )

On the work front, I have a new contract, back working for HMRC, which will see me through to the end of my pregnancy. And even though they’re not paying me as much as I was earning in either of my previous 2 roles, I will still have enough to take up to a year’s maternity if I wanted to. I probably won’t though. My savings would be mostly depleted at that point and the thought of having so little put aside fills me with horror – I’d rather have less time with the baby than run the risk of us having no safety net. And besides, R will be at home and can pick up the slack, and I’ll probably be able to work from home and still spend a lot of time with our little one.

On a brighter note, and apart from the kicking and heartburn and intermittent exhaustion and stretchy belly, I’m feeling physically really good. I generally have more energy, I haven’t puked in 3 weeks, and my rhinitis and headaches have gone away. I do have hay fever now, for which I seem to be unable to find a pregnancy-appropriate medication, but I’m going to speak to my GP tomorrow and get something to sort it. And I finally caved and bought some maternity clothes and did my hair properly for the first time in about 6 months, and have to say – I am looking pretty good right now! My skin is really clear, my hair looks nice and thick, and my bump looks pretty cute when it’s dressed properly. And lockdown ends today so I can finally go into town and have a bit of a wander around and actually meet up with people, so I have a reason to look nice 🙂